The Perils of Education

Education (the proper kind) is a good thing, but not an unmitigated one. Let’s consider the negatives as well.

You’ve probably seen the staggering numbers thrown about for the computational power of the human brain. Yet to multiply 3 four-digit numbers together almost everyone will need some paper and quite a lot of time. Almost all of that vast computational power is in dedicated systems for walking and catching and talking and seeing and all the other things we do. We have so little “general-purpose” computation skill that the very first “computational machines” we built out of cogs and wheels beat us at the task of simple numerical manipulations in the late nineteenth century, and the gap on that front is now ludicrously wide1.

Enter education, a tool designed to sharpen our meager helping of “intelligence”. Humanity has over thousands of years crafted methods of enhancing the rational being within us, teaching it to do very useful tricks that have gone on to form the basis of modern civilization.

Training our inner Vulcan comes with poorly-discussed perils. Perhaps even deliberately so, as we seem to have a collective fear that if we don’t praise education beyond reason, people may not pursue it. But as with many taboos, if the proposition is given any sort of challenge, it immediately disintegrates. That leads one to start thinking thoughts that our Powers that Be would prefer not be thought. The Merit of the Meritocracy must be as unexamined as the Emperor’s new clothes, lest people start getting Ideas.

The unquestionably positive nature of education serves as one of the minor girders of the current Beast system.

Nothing is without its trade offs, and education is no exception. So what can we see if we turn the very mechanisms of critical thought that education is supposed to instill to the question of what the negative effects of an education may be?

One of the problems I’ve encountered when I’ve posted embryonic versions of this is that people tend to have an idealized version of education. Idealized education is very bizarre when examined:

Obviously, that is not how it works. But the idea sneaks back in when we are not looking.

Real education produces people who can not correctly identify the first President of the United States, locate the Straight of Gibraltar, or integrate a polynomial after just a few years out of school.

For the likely audience reading this, I must also disclaim that I’m not talking about left-wing propaganda factories or glorified babysitting. This fake education will also have the drawbacks I’ve discussed, but in that case they are leaned into as they work for the desires of the propagandists.

But those perils are both well-discussed and obvious. I’m talking about real education, or a good education, or whatever you want to call it. One that teaches things that are the product of centuries of human struggle, and that are hard to pick up on your own no matter how motivated. I also include high-quality self-education here; picking up a pile of books and developing your own understanding of the root causes of the fall of the Roman Empire is included in what I mean by education here.

Education Teaches That Simple Is Wrong

Do we teach macaroni and cheese tastes good?

Do we teach that if you pour more water into a glass, it will have more water afterwards?

Do we teach that if you put a ball on top of a book and remove the book, the ball might roll away?

No. We don’t need to “teach” things that are completely obvious. To the extent that schools do in fact “teach” these things to young children, well, children learned what “red” and “blue” were long before even Aristotle.

Once you get past children so young they probably shouldn’t even be in a school, we teach complicated things. Non-obvious things. For instance:

However, the fact that everything we teach is complicated also implicitly teaches that everything is always complicated, so all simple explanations are wrong, simply because they are simple. (Notice how educated people will often use “simplistic” as an insult!) But this is false. Sometimes things are simple. And sometimes, while a thing may not be 100% simple, it may be 99.9% simple and the remaining .1% is only relevant sometimes.

Who could believe this? 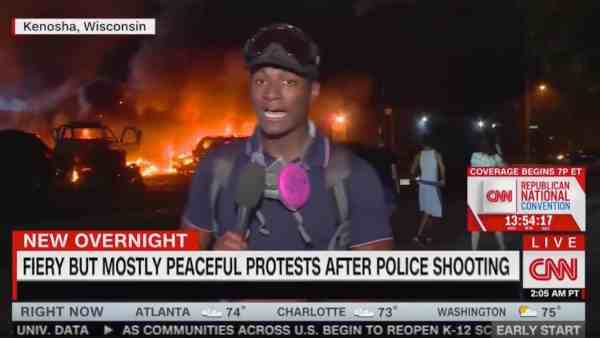 An uneducated person would not be fooled.

An education involves a lot of teaching about things that aren’t what they appear. To become educated one must spend years practicing suspending disbelief and accepting words (and perhaps some math) over what seems obvious at the moment.

Most of the people reading this will immediately know what is wrong with that picture; to them I say, do not underestimate this effect. I was out and about in the more liberal bits of the internet when this was a daily topic, and the liberals completely and utterly accept the words in this picture. To them, these protests were peaceful, because the words said so, and those words outweigh the obvious visual truth3.

There are certain patterns of speech that education can create a particular vulnerability to. Education has a certain jargon to it, a certain prosody, that “sounds educated”.

The most entertaining form of this is when someone who doesn’t know how to speak in this language tries anyhow, trying to use “big words” without understanding what they mean. The best is when they consult a thesaurus and just start substituting words, without realizing the differences in connotations.

More accurately, education has a set of dialects. If you want to hear the simplest dialect, just tune in to CNN any time they have a guest with “Doctor” in their name. They can spew the most amazing garbage, but it’ll have numbers and “studies show” and all sorts of other indicators of Educatedese in it so that the people watching, almost all of which are products of the modern education system, will trust the dialect no matter what the dialect is being used to express.

On the other end, academia has its own dialect, which can fool those who made it to the post-graduate level. If you’d like to read some of this, I can recommend the Sokal Hoax as a good start. There’s a lot of people who simply can’t understand that paper, which is fine. There’s a lot of people who understand the contents of that paper are garbage, but would be reluctant to clearly say so, because it’s written in Academicese. Only a relative handful of people could read that paper, understand it, and yet have enough detachment from the aura of respect surrounding Academicese to confidently label it garbage.

An example that almost everyone has had some brush with is education. It is a constant fountain of

This can be seen most famously in the decades of whiplash in math education, but the “science” of education has done this many times4.

For the reasons already discussed, education is fundamentally about things that initially will not seem correct. A certain amount of suspension of disbelief is necessary, especially when it comes to things like chemistry or other hard sciences.

The education process runs the risk of creating a student who becomes very skilled in the suspension of disbelief, but lacks any mechanism to restore disbelief when it is appropriate. For obvious reasons, it’s really hard to directly educate one in when to restore the sense of disbelief. I encourage the system to try, but intrinsically the education system is not capable of educating someone into knowing when to ignore the education system. This is one reason why a high degree of education is not necessarily a good thing for everyone. This leaves a student worse off than an uneducated person in a critical life skill.

Of course, it doesn’t help that the modern leftist education system continues their policy of draining words of all useful value by calling courses in which they give the students good grades for mouthing liberal platitudes and flunk them for any form of truly independent thought, but this is, once again, simply taking advantage of a peril education naturally comes with anyhow.

All of these issues are things that I don’t think are designed in by anybody. They’re simply endemic to the entire process of being educated. The current “Prussian” education system may do little to avoid these problems, but I believe that these problems are intrinsic dangers to any educational process.

Sadly, excellent education does not seem to the normal outcome. Ivory Tower syndrome is a well-enough known to have a name, where someone nominally gifted with IQ points makes grand, complicated pronouncements about reality, cut off from any real world feedback that would allow them to falsify their theories, unable to help or be helped by anybody in the real world. Even the excellently-educated will have to be vigilant against these issues continuously. Without humility and wisdom, the temptation to lower the guard will eventually win out.

The Temptation To Overreact

It also important not to overreact to the flaws in education.

Many things are simple, yes. But there is also a lot of irreducible complexity in the world.

The solution to excessive suspension of disbelief is not to disbelieve everything, merely because it is taught in some education.

It is good to realize the flaws in education, but it is better to use that understanding to lift one’s education up to that excellent education, even perhaps years after your formal education has ceased, than to throw the idea away entirely.